Tea parties show that Lyndon LaRouche has taken over GOP

For me the most fascinating aspect of the tea party phenomenon that we have witnessed in 2009 is the degree to which it shows that Lyndon LaRouche has taken over the modern Republican Party.

The Republican party is an extremely hierarchical organization -- a pyramid with one leader at the top who cannot be questioned or challenged. And after eight years of being led by a shell of a man, the GOP was simply a shell of a party. No leadership had been developed within the party in over eight years so they were forced to nominate a septuagenarian and a glorified cocktail waitress for president. Furthermore not since Reagan has the party had any idea of how to mobilize people -- contracting that out to the NRA, talk radio, and the Christian Coalition.

By 2009, with the complete absence of any leadership at the head of the party, Lyndon LaRouche was able to walk right in and take over the Republican party without firing a shot. Because, as crazy as he is, LaRouche still knows how to mobilize a few (whacked out, paranoid) people. Make no mistake about it, the tea parties that we witnessed this year are pure Lyndon LaRouche and his gang of crazies. The photos of bodies piled at Dachau, the chaotic rallies with an infinite number of conflicting complaints all presented at the same time, the complete lack of any cohesive rational narrative, the obsessive focus on demonstrating just pure crazy paranoid anger -- that's all signature Lyndon LaRouche mobilization.

So when Michele Bachmann invites the LaRouche crowd to descend on DC -- and the rest of the Republican political establishment gets pulled into doing their bidding, it's really a remarkable statement about the complete collapse of a once proud American political party. The fact that traditional beltway media (and the RNC itself) doesn't realize it's been played by LaRouche shows what a disaster our political pundit class has become as well.

Photo of LaRouche supporters from back in 2007 -- before they took over the Republican Party. The telltale sign of a LaRouche protest is that they always make sure to coat everything they say or do with just a little extra dose of crazy. 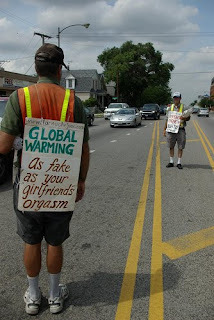 c'mon, that sign about the fake orgasm was hilarious! is the problem that you suspect that your girlfriend is faking HER orgasms?

Ha! Yeah the photo is pretty funny. Great font too. But what's up with the orange vests and standing in the middle of traffic? With the LaRouche crowd, there's always just a little extra dose of crazy in there.

Talk about silly conspiracy theories...
A few LaRouchies tried to make hay out of the Teabaggers. It doesn't mean that they are taking over the Republican party, let along its "moderate" wing.. Comparing ones enemies to the Nazis is not only a LaRouche tactic--the Right to [Run Everyone Else's] Lifers have been doing this forever. It has long been a mainstream of libertarian rightists like Alex Jones. It's only natural that it would be taken over by the Teabaggers. And chaotic contradictory slogans being the LaRouche brand label? Come on!
Get a grip.

Evan, I think YOU are the teabag. Tea party supporters come from all walks of life, and include people that are horrified at what the Democrats and Obama have done to our country. It's a good example of the dangers of one-party rule. From you disparaging comments, it is obvious you are a left-wing nut job. The sad reality is that normal people simply cannot communicate civilly with wackos like you.

Not really sure what you're upset about. Obama has saved capitalism from (once again) destroying itself, saved GM from collapse, stopped the rate of job losses, passed health care reform and Wall Street reform, and started the withdrawal from the disastrous war in Iraq. It's not perfect, but it ain't a bad record either.