Book review: The Denial of Death by Ernest Becker 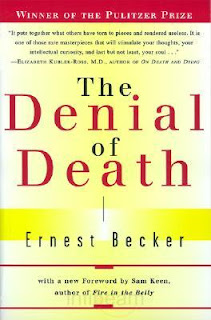 George Monbiot's recent blog post about Ernest Becker, which I wrote about (here), caused me to go back to my book shelf and pull out Ernest Becker's book, The Denial of Death. I bought it a couple years ago after seeing it mentioned on Sam Harris' recommended reading list. But I had only made it half way through before getting sidetracked.

Now, having finished it, I've gotta say it's one of the most extraordinary books ever written (some other folks thought so too -- it won the Pulitzer Prize in 1974). We live in an age of so much noise including:
And we're as miserable as ever.

Ernest Becker cuts through all that noise and says, 'look, the reason human beings are such a mess is that we are all freaked out about dying and we all create these ridiculous immortality projects to try to repress our fear of dying. No amount of therapy or advice or repression or distraction is actually going to be able to take that fear away completely. So ultimately, true heroism comes from accepting our ongoing fears of our own mortality and proceeding with our various projects anyway, even in the face of the knowledge that we are all gonna die.'

Of course this will be an alarming thesis to many -- particularly those heavily invested in the repression of their own immortality project. I have experienced an amazing groundedness after reading The Denial of Death. The book enables us to just drop all of the noise. It enables us to see the world as it is -- a place that is terrifying and yet beautiful too. It enables us to drop the false heroism of our shinny immortality projects and embrace the true heroism of proceeding even in the midst of doubt and fear.

Interestingly, Sam Keen does such a great job of summarizing Becker in the foreword to The Denial of Death that I want to quote from Keen first:

Becker's philosophy as it emerges in Denial of Death and Escape from Evil is a braid woven from four strands.

2. The basic motivation for human behavior is our biological need to control our basic anxiety, to deny the terror of death. Human beings are naturally anxious because we are ultimately helpless and abandoned in a world where we are fated to die. ...

3. Since the terror of death is so overwhelming we conspire to keep it unconscious. ...
Society provides a line of defense against our natural impotence by creating a hero system that allows us to believe that we transcend death by participating in something of lasting worth. We achieve ersatz immortality by sacrificing ourselves to conquer an empire, to build a temple, to write a book, to establish a family, to accumulate a fortune, to further progress and prosperity, to create an information-society and global free market. Since the main task of human life is to become heroic and transcend death, every culture must provide its members with an intricate symbolic system that is covertly religious. This means that ideological conflicts between cultures are essentially battles between immortality projects, holy wars.

4. Our heroic projects that are aimed at destroying evil have the paradoxical effect of bringing more evil into the world. Human conflicts are life and death struggles --my gods against your gods, my immortality project against your immortality project. The root of humanly caused evil is not man's animal nature, not territorial aggression, or innate selfishness, but our need to gain self-esteem, deny our mortality, and achieve a heroic self-image.

In the book itself, Becker masterfully updates psychoanalysis by showing that denial of death, not sexuality per se (as Freud argued), is the prime motivating force behind the repressions that create our culture.

Consciousness of death is the primary repression, not sexuality. As Rank unfolded in book after book, and as Brown has recently again argued, the new perspective on psychoanalysis is that its crucial concept is the repression of death. This is what is creaturely about humanity, this is the repression on which culture is built, a repression unique to the self-conscious animal. Freud saw the curse and dedicated his life to revealing it with all the power at his command. But he ironically missed the precise scientific reasons for the curse. ...

The psychoanalytic literature remained almost silent on the fear of death until the late 1930's and World War II. And the reason was as Rank revealed: how could psychoanalytic therapy scientifically cure the terror of life and death? But it could cure the problems of sex, which it itself posited. (p. 100)

Becker's thesis is summed up clearly and humbly at the conclusion of his book:

I think that taking life seriously means something such as this: that whatever humanity does on this planet has to be done in the lived truth of the terror of creation, of the grotesque, of the rumble of panic underneath everything. Otherwise it is false. Whatever is achieved must be achieved from within the subjective energies of creatures, without deadening, with the full exercise of passion, of vision, of pain, of fear, and of sorrow. ...

Update #1. Buddhism, monasticism, Stoicism, abstinence, and the Protestant work ethic all make better sense when seen through the writings of Ernest Becker. Each of these paths provides a theology and a set of practices for repressing the body which is a really just an attempt to deny our humanity in service of repressing our fear of death (no body, no humanity=voilà, nothing to take away, nothing to die). It's fascinating then to see attempts to repress the body in religious settings (repression of sex through Catholicism or repression of the body through work in Protestantism for example). Repression of the body in a religion setting seems like a hedge of sorts, a poker tell that the leaders of said religious order may not be so sure about the existence of god themselves (because it would seem that the primary motivation for wanting to repress the fear of death is that one is not 100% sure god has it covered). And it actually suggests that the true function of religion may not be to introduce us to God at all (a short hike in nature does a better job of that anyway). Rather the true function of religion may simply be to provide tools for repressing our fear of death -- and the handiest tool laying around, apparently, is repressing the body. That would make sense from the perspective of evolutionary psychology -- those who best utilize religious practices for blocking out the fear of death probably invest the most energy in immortality projects (homes, careers, winning wars, building families, etc.).
Posted by RFK Action Front

point #4 from the forward is interesting to contemplate.

BTW, did you just recently participate in landmark forum? seems like they keep popping up in your posts...

Thanks for the comment Jeanne! Ah yes, point #4 is fascinating -- and particularly relevant to things in the middle east too.

Nope, I've never done landmark. But I have a few friends who have so I've heard about it through them. The dude doing landmark with his cat really nails it from what I've heard.

Thank you so much for reading the post and for the comment too -- it really makes my day!

Becker was a lifelong atheist himself, so while of course he sees a role for God and Religion (they are a part of history), and I recall he speaks positvely of them as coping mechanisms, he chose something else for himself.

I listened to the audio book version of The Denial of Death several times but went back to the internet to somehow put the meaning together. I think the fear of death is so great that I didn't really want to understand the book. Thanks for this synopsis. My girlfriend's kidneys are failing and she will die and I am trying to make sense of this. Ernest did not address the idea of young people dying. Somehow having a chance to live longer makes it easier to accept.