john and vicki and charlie and rick 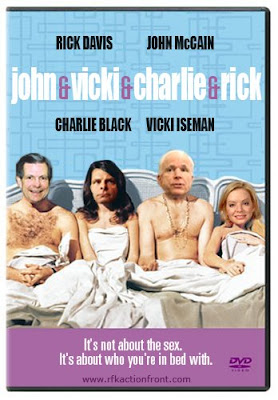 (Some of you may remember the 1969 movie, bob & carol & ted & alice? I thought it was a fitting image to capture John McCain's fondness for surrounding himself with Washington lobbyists.)

John McCain sure does love him some lobbyists.

Here's what we know:

John McCain's describes himself as a "reformer."

His record shows that he is in bed with Washington lobbyists.

February 21, 2008, the NY Times reported that McCain's staff had to intervene because they believed he was having an affair with lobbyist Vicki Iseman. Iseman is a partner with Alcade & Fay which has done $46.2 million in lobbying over the last five years. They represent clients such as CACI (linked to torture at Abu Ghraib prison in Iraq) and Dow Chemical (one of the largest toxic polluters in the country). [Vicki is pictured on the right side of the picture above.]

Turns out, Vicki Iseman is just the tip of the iceberg.

McCain's campaign is crawling with Washington lobbyists -- 59 in all. They include:

Rick Davis, Manager of the McCain campaign, and Partner in the lobbying firm Davis Manafort, Inc. Davis's lobbying firm made $2.85 million in fees between 1998-2005. Davis's firm has lobbied on behalf of GTECH (the troubled lottery company), SBC, and the government of Nigeria. [Rick is the unhappy fellow second from the left.]

Charlie Black, Senior Adviser to McCain, and Chairman of BKSH & Associates. BKSH has made $57.4 million on lobbying since 1998. Black's company has done lobbying work for cancer-stick maker Philip Morris, Ahmed Chalabi (Iraqi huckster who gave misinformation to the U.S. to encourage the invasion of Iraq), and mercenary private military contractor Blackwater USA. Charlie Black admitted that now, he runs his lobbying business from inside John McCain's Straight Talk Express bus. [Charlie is the happy guy on the left side of the picture.]

So next time you hear John McCain describe himself as a reformer, just remember the 59 lobbyists he is in bed with.

Hat tip to Brave New Films for their documentation of McCain's lobbyist "Friends." Hat tip to Sourcewatch for their research on Washington lobbyists. And big props to my friend Paul Salamone (www.paulsalamone.com) for his awesome Photoshop work.

(The photo montage above is an RFK Action Front original. Feel free to send to your friends.)