It's not just poor Republicans who vote against their economic interests...

It has been well documented that poor white Republicans consistently vote AGAINST their own economic interests. Thomas Frank wrote a book about this strange phenomenon titled, What's the Matter with Kansas: How Conservative Won the Heart of America.

It's also been well documented that the economy does better under a Democratic President than under a Republican President (the distortions of the Republican noise machine notwithstanding). See for example, here, here, and here.

So I was fascinated this week when the Wall Street Journal ran a front page story titled, Stocks Tarnished by 'Lost Decade.' From the article:

The stock market is trading right where it was nine years ago. Stocks, long touted as the best investment for the long term, have been one of the worst investments over the nine-year period, trounced even by lowly Treasury bonds.

The Standard & Poor's 500-stock index, the basis for about half of the $1 trillion invested in U.S. index funds, finished at 1352.99 on Tuesday, below the 1362.80 it hit in April 1999. When dividends and inflation are factored into returns, the S&P 500 has risen an average of just 1.3% a year over the past 10 years, well below the historical norm, according to Morningstar Inc. For the past nine years, it has fallen 0.37% a year, and for the past eight, it is off 1.4% a year. In light of the current wobbly market, some economists and market analysts worry that the era of disappointing returns may not be over.

A couple points about the article.

The 2,000 word article by E.S. Browning NEVER MENTIONED George Bush, government spending, the federal budget, or the Iraq War. I kid you not. Seriously, the guy tries to make the claim that this stuff is just cyclical, just a coinkydink, without ever making the connection that the dismal economic performance of the last 8 years is the fault of George W. Bush and his Republican enablers in Congress and at the Wall Street Journal.

Let me say that a different way: 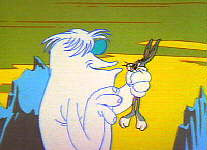 Seriously, reading the Wall Street Journal is like listening to a fascist version of Lennie Small from Steinbeck's Of Mice and Men. They kill the economy and then wonder, "whut happind?"
Posted by RFK Action Front