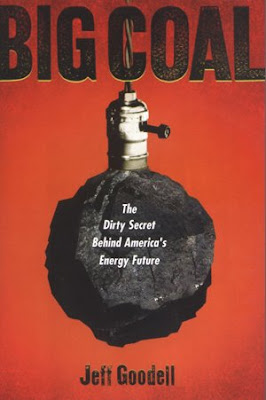 RFK Action Front is dedicating this week to exposing the evils of the coal-fired power industry. In many ways, coal is like sweatshop labor. The industry goes to great lengths to keeps its evils out-of- sight and out-of-mind. But once people know the facts, they tend to demand sensible solutions.

Here's the schedule for the week (subject to change of course):
Monday: Book review of Big Coal: The Dirty Secret Behind America's Energy Future
Tuesday: Is there a link between coal-fired power plants and autism?
Wednesday: RFK Action Front strikes back at Americans for Balanced Energy Choices;
Thursday: How the coal industry buys off the TV networks and politicians;
Friday: What you can do to fight back.

I just finished reading Big Coal: The Dirty Secret Behind America's Energy Future by Jeff Goodell and found it incredibly informative. Big Coal reveals the dirty secrets of the coal industry in much the same way that Fast Food Nation showed the dark side of the American diet. In Big Coal, author Jeff Goodell uses interviews and in-depth research to chart the entire life cycle of coal -- from the toxic Appalachian strip mines, across the railroads to the coal-fired power plants, and then follows the pollution that they emit and the politicians bought with coal profits. Goodell is a journalist who goes out of his way to make sure all sides are fairly represented. But, like so many issues, once all of the facts are on the table, it's pretty clear that coal is a lousy energy choice that dramatically reduces quality of life for most Americans while enriching a few.

Here are some of the best nuggets from the book (all page numbers refer to the hardcover edition):

"Amory Lovins estimates that by the time you mine the coal, haul it to the power plant, burn it, and then send the electricity out over the wires to the incandescent bulb in your home, only about 3 percent of the energy contained in a ton of coal is transformed into light." p. xvi

"Since 1900, more than 100,00 people have been killed in coal mine accidents... Black lung, a disease common among miners from inhaling coal dust, can be conservatively estimated to have killed another 200,000 workers. " p. xx

So basically, between mining accidents and black lung disease, the coal industry is responsible for as many deaths as 9/11 -- every year for the past 100 years.

"According to a ten-year study know as ExternE, which Princeton University professor and energy expert Robert Williams calls "state of the art," factoring in just the public health effects of air pollution from U.S. coal plants would add an average of about $13 per megawatt-hour to the price of coal-fired power. (This does not include damages connected to mining, nor does it include costs related to global warming.)" [For the worst coal-fired power plants] "added costs could be as high as $33 per megawatt-hour. In comparison, the cost of externalities on a natural gas plant are only about 40 cents per mega-watt hour. In a market that accurately reflected the true cost of power, old coal burners would be shut down because the price of the power they generated would be too high for the market to bear." p. 116

In the mid-1980s, [Brigham Young University researcher C. Arden] Pope recognized "a unique, natural experiment" when the Geneva Steel mill in the Utah Valley shut down during a labor dispute, allowing Pope to explore the health effects of pollution from the plant. Geneva Steel was the focus of tremendous anger in the region. Residents blamed the black plumes from its smokestacks for making their children sick. Pope discovered that children's hospital admissions for respiratory disease essentially doubled during periods when the mill was operating versus when it was not." p. 130

"By any measure, the volume of pollution released by coal plants remains staggering. Nationwide, power plants account for two thirds of all sulfur dioxide, 22 percent of all nitrogen oxides, nearly 40 percent of carbon dioxide, and a third of all mercury emissions. Coal plants also release some sixty varieties of what the EPA terms "hazardous air pollutants," including known toxins such as lead (176,00 pounds), chromium (161,000 pounds), arsenic 9100,000 pounds) and mercury (96,000 pounds). And that's just what goes into the air. Each year, coal plants produce about 130 million tons of solid waster -- about three times as much as all the municipal garbage in the nation. This combustion waste -- fly ash, bottom ash, scrubber sludge -- is laced with heavy metals and other potentially toxic compounds..." p. 123

In fact, one study by the EPA found that between 1970 and 1990, for every dollar spent on pollution controls, the public saves $42, mainly in reduced health care costs and increased productivity from people who would otherwise have been injured or killed by air pollution." p. 161

"A few days before President Bush's inaugural, as the new president was assembling his team of transition advisers, the Washington Post reported that Big Coal was "particularly well-represented on the Bush team." And Peabody Energy was particularly prominent among the Big Coal representatives. Irl Engelhardt, the company's aggressive fifty-three-year-old chairman and CEO, was appointed to the EPA transition team. Peabody vice president John Wootten and Steve Chancellor, chief executive of a Peabody subsidiary, Black Beauty Coal, were on the Energy Department team. And Thomas Sansonetti, a former lobbyist with a Wyoming law firm representing Peabody and other energy firms on leasing matters, headed the group choosing the top personnel for the Interior Department.

"It is important to see that the barriers to change are not technological but political." p. 251

Big Coal is expertly researched, fasted-paced (the author also writes for Rolling Stone and the NY Times), and well-worth the read.