Okay so I saw this editorial by Peggy Noonan when it came out last Friday. (Hat tip to Blue Texan at Firedoglake for flagging it and doing a great piece about it.) But at the time, I told myself, 'just ignore it, think happy thoughts,' because really getting into the muck of what's going on with this editorial was just gonna make me mad.

Then Nascar lovin' multimillionaire newscaster Brian Williams wrote on his blog that not only did he like Noonan's editorial but he thinks Noonan deserves the Pulitzer Prize. Which caused steam to shoot out my ears so now I'm here writing a blog post instead of watching Survivor.

Let me just take a moment to break down why Noonan's original editorial is so problematic and what it says about the Wall Street Journal, Brian Williams, and the modern Republican Party.

Noonan's editorial, The View from Gate 14 questions Barack Obama's patriotism (big surprise there, given that the entire Republican noise machine apparently got the memo to try to advance that narrative this week). The centerpiece of Noonan's editorial is this:

Main thought. Hillary Clinton is not Barack Obama's problem. America is Mr. Obama's problem. He has been tagged as a snooty lefty, as the glamorous, ambivalent candidate from Men's Vogue, the candidate who loves America because of the great progress it has made in terms of racial fairness. Fine, good. But has he ever gotten misty-eyed over . . . the Wright Brothers and what kind of country allowed them to go off on their own and change everything? How about D-Day, or George Washington, or Henry Ford...

Yeah because it's not enough that Barack Obama already idolizes Ronald Reagan, he also has to get teary eyed over slave owner George Washington and neo-Nazi Henry Ford -- the guy who was actually cheering for Germany to win World War II?

Look, Peggy Noonan isn't dumb. As Reagan's speech writer, she was his voice and his brain as it deteriorated over the course of his presidency. Noonan could have picked ANY Americans to illustrate her professed love of country. And she intentionally chose a SLAVE OWNER (George Washington) and SOMEONE WHO SIDED WITH HITLER (Henry Ford) to illustrate her point. Which is what exactly? That you have to be a white supremacist to be a good American? Noonan chose these examples to rub Barack Obama's nose in America's long history of racism. Noonan chose these examples, and the Wall Street Journal chose to publish this piece to tell Barack Obama, "no matter how much you love Reagan, no matter that you were head of your class at Harvard -- you'll never be part of the white establishment." Notice the pivot in Noonan's argument:

"[Obama has been portrayed as] the candidate who loves America because of the great progress it has made in terms of racial fairness. Fine, good. But..."

Noonan is going out of her way to remind Obama that this is not just the country of Martin Luther King and Cesar Chavez but also the country of the Middle Passage, Jim Crow, and the KKK. This editorial is the worst kind of sneering Republican country club racism and the sort of coded dog whistle politics that white southern voters love to hear.

For Brian Williams or anyone else to praise this vile race baiting editorial as good journalism is incomprehensible.

Noonan and Williams and Rove and Atwater and Murdoch and Bush have made modern Republicanism synonymous with racism and racism synonymous with patriotism. At some point, you would think that there must be some decent Republicans somewhere who would object to this grotesque symphony of hate. But so far, crickets... 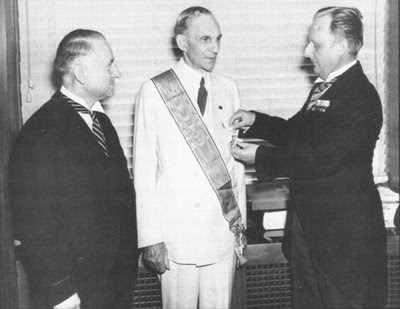 Also, be sure to check out Glenn Greenwald's article on this whole sordid mess.

And the crazy thing is, for all I know, Obama really does get all misty-eyed thinking about Henry Ford and vile Republican hate merchants like Peggy Noonan -- because he's an amazing human being who goes out of his way to see the best in people. But of course, Noonan's too busy telling Obama to smell the glove to notice any of that.
Posted by RFK Action Front