Cartel: a formal (explicit) agreement among firms. Cartel members may agree on such matters as price fixing, total industry output, market shares, allocation of customers, allocation of territories, bid rigging, establishment of common sales agencies, and the division of profits or combination of these. The aim of such collusion is to increase individual member's profits by reducing competition. Competition laws forbid cartels.

Picture if you will, a group of millionaire white men (mostly, some women too, and some people of color but mostly white men) who come up with a scheme whereby they organize thousands of mostly black young men in the prime of their lives into a single industry. They convince these mostly black young men (some white, latino, and asian men, and some women too) to perform in front of a huge nationwide TV audience -- with the promise that if they perform really really well, they might eventually be paid millions of dollars. But there's a catch -- these young men will work 365 days a year at their job but they are required, by the cartel, to donate all of their labor, to these white men for 4 years. In fact, 99% of them will not be paid for their labor at all (instead the white male millionaires will keep all of the earnings). The scheme promises that about 1% of these young men will become millionaires -- but as I said, the rest will get nothing. Making matters even more inhumane, the millionaire white men decide that these unpaid laborers must remain "pure" -- even if they come from the most impoverished families in the country they cannot accept ANY gifts whatsoever -- not even a ticket to a show or a trip to the dentist or else they will be kicked out of the system.

So what am I talking about here? A South African diamond mine? A pre-Civil War version of American Idol? A factory that relies on forced labor in China?

Nope, I'm talking about the National Collegiate Athletic Association better know as the NCAA. The NCAA is a multi-billion dollar cartel. For example, in 1999, CBS paid $6 billion for the rights to broadcast the NCAA basketball tournament for 11 years. $6 billion! Out of that $6 billion -- how much do the players get? You guessed it, $0. Fox is paying another $320 million for 4 years just for the rights to broadcast the Bowl Championship Series (BCS) football games. College football and basketball coaches are paid millions of dollars each year -- apparently they are not required to stay pure. Yet the players whose labor creates these billions of dollars in revenue are paid $0. (And don't go talking to me about the value of the education these men get -- we all know that graduation rates for scholarship athletes are abysmal. These "student-athletes" are used for their labor, pure and simple.) It seems to me that not only is the NCAA an illegal cartel that is breaking the law by restraining competition, they very well may be in violation of the 13th and 14th Amendments to the Constitution.

Odom, who lost his father to divorce at age 6 and his mother to cancer at 12, attended three high schools his senior year and signed with Nevada-Las Vegas amid rumors that he received improper inducements of cash and free dental work from a university booster.

The NCAA literally wanted to punish a young black man who was dirt poor and being raised by his grandmother from seeing a DENTIST! Meanwhile the coach of the team and the white man in the NCAA office who made up the rule, were paid millions. 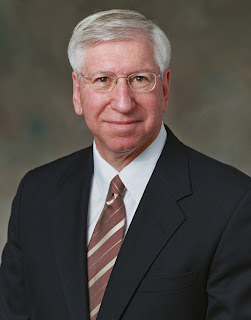 NCAA President Myles Brand, multi-millionaire who makes his money by stealing the labor of thousands of young athletes. You sir have been named this week's "Worst Person in the World."
Posted by RFK Action Front