Was slavery, not Protestantism, the catalyst for the emergence of modern capitalism? 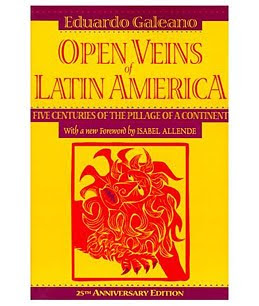 Back in April of this year, President Obama attended the Summit of the Americas in Trinidad. At a gathering with regional leaders before the Summit, Obama exchanged greetings with Hugo Chavez, President of Venezuela, who gave Obama a copy of Eduardo Galeano's 1973 book, Open Veins of Latin America: Five Centuries of the Pillage of a Continent. The gift was a marketing sensation for the book, which within 2 days rose to #2 on Amazon.com's bestsellers list. Time magazine wrote about the gift of the book (here) and (here).

I thought it was an interesting gesture -- if you had just 5 minutes with a world leader and could give him or her 1 book that might help him/her see the world in a new way, what would it be? Like many other Americans I decided to see for myself what made this book special.

As some of you know, I'm a huge fan of Max Weber's The Protestant Ethic and the Spirit of Capitalism. In the book, Weber argues that Protestantism -- with its emphasis on work without end while also being hostile to the "pleasures of the flesh" (dancing, drinking, sex) led to the widespread accumulation of capital for the first time which was the catalyst for the birth of modern industrial capitalism. It's an absolutely brilliant book that, along with Weber's other works on religion, and industrial and political organization, gave birth to the field of sociology as an academic discipline.

What's especially interesting then about Open Veins of Latin America is that in many ways, Galeano is looking at a similar time period as Weber. Galeano is also trying to understand the origins of modern industrial capitalism. But for Galeano, the institution of slavery, not Protestantism, is the catalyst for the birth of modern capitalism. He makes a really compelling case:

Adam Smith said that one of the principal effects of the discovery of America "has been to raise the mercantile system to a degree of splendour and glory which it could never otherwise have attained to." According to Sergio Bagú, the most potent force for the accumulation of mercantile capital was slavery in the Americas; and this capital in turn became, "the foundation stone on which the giant industrial capital of modern times was built." The New World revival of Greco-Roman slavery had miraculous qualities: it multiplied the ships, factories, railroads, and banks of countries that were not originally involved in Africa or -- with the exception of the United States -- in the fate of the slave crossing the Atlantic. (p. 79)

Banks proliferated in Liverpool, Manchester, Bristol, London, and Glasgow; Lloyds [of London] piled up profits insuring slaves, ships, and plantations. From the beginning, London Gazette announcements advised that fugitive slaves should be returned to Lloyds. Slave-trade profits financed the building of Britain's Great Western railway and of industries such as the Welsh slate factories. Capital accumulated in the triangular trade made possible the invention of the steam engine: James Watt was subsidized by businessmen who had made their fortunes in that trade. (p. 81, citing the work of Eric Williams in Capitalism & Slavery)

In New England the slave trade gave birth to a large part of the capital that produced the U.S. industrial revolution. In the middle of the eighteenth century Northern slave ships carried barrels of rum to Africa from Boston, Newport, and Providence; they exchanged the rum for slaves, sold the slaves in the Caribbean, and from there brought molasses to Massachusetts, where it was distilled and converted into rum, completing the cycle... With capital obtained from this trade in slaves, the Brown brothers of Providence installed the foundry that provided George Washington with guns for the American Revolution. (p. 82)

I can see why Hugo Chavez or any other leader in Latin America would pick this book to help bring someone up to speed on Latin America. You can't understand Latin American politics and how the people of Latin America view the United States and the industrialized world, without understanding the 500 years of conquest that began with Columbus and continue up to this day. And Open Veins of Latin America is a great crash course in those five centuries of exploitation.

Here's what I find shocking about all of this: I was a political science major in college. I took a fair number of economics classes. And I even specialized in Latin American politics. The idea that slavery was perhaps the catalyst for the birth of modern capitalism, was NEVER mentioned in any class I've ever taken. How is that possible!? It's not even a controversial thesis. As Galeano shows -- insurers and banks in England the U.S. made their profits in the slave trade and then in turn financed things like foundries and steam engines. Not mentioning the relationship between slavery and capitalism is like not mentioning the relationship between the big bang and astronomy. To me it feels like more than an omission from my formal education. It feels like the sort of willful blindness that we perpetuate in order to enjoy the fruits of our collective violence -- free of the guilt that might otherwise get in the way.

So then how do we reconcile the competing claims of Weber ('Protestantism was the catalyst') and Galeano ('slavery was the catalyst')? I'm not sure that we have to. I think Protestantism, slavery, and capitalism all worked (or is it work, present-tense?) hand-in-hand. The Protestant Reformation also led to capital formation, banks, and perhaps most importantly, organized industrial societies. It is true that many Catholic nations (Spain, Portugal, and Italy) profited by the slave trade. But as Galeano shows, it was the nascent banks in Protestant countries that profited most from the pillaging of the New World -- first by extending loans to slave traders and slave trading nations, and then taking their profits and plowing them into manufacturing to sell to the rest of the world. So Protestantism provided the formal organization of the capitalist system while slavery turbo-charged the whole system -- flooding European and American nations with capital thus turning modern capitalism into capitalism on steroids.

If you have the chance, I highly recommend checking out Open Veins of Latin America: Five Centuries of the Pillage of a Continent.

And thanks to Galeano, my next read is going to be, Capitalism & Slavery by Eric Williams.

Update #1: In many ways, Open Veins of Latin America makes an interesting sequel to Guns, Germs, and Steel: The Fates of Human Societies and a fitting prequel to Shock Doctrine: The Rise of Disaster Capitalism.
Posted by RFK Action Front