In defense of Phil Jackson 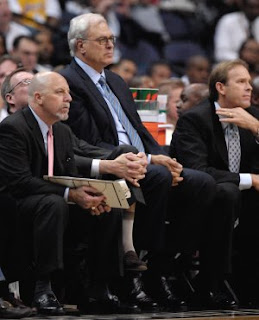 As any reader of this blog knows, I'm not a big fan of Phil Jackson. I've never seen a coach look so completely lost on the sideline as Jackson. But after Mr Magoo won his 10th title, I challenged myself to see the wisdom in his approach. And I think a powerful case can be made for his method. I'm not saying it's correct (other than the 10 titles which make him the most successful coach in NBA history) only that a strong case can be made. (-;

During Game 5 of the finals -- the Lakers went on a 16-0 run in the second quarter that sealed the game and the championship. Stan Van Gundy called 3 TIMEOUTS during the Lakers' run to try to stop the bleeding but nothing worked. During the regular season, Phil Jackson will never call a timeout to stop another team from making a run. He just won't do it. Jackson will allow his team to be completely humiliated on national TV -- is even willing to lose the game, but will not call a timeout to stop a run.

But maybe that's his genius.

Jackson's genius may be that he puts the entire onus for winning on the player, rather than on himself as coach. Most nights Jackson looks as if he could give a damn whether they win or not. A player looks over at the bench for guidance and Phil Jackson is looking up in the stands trying to find the churro vendor so he can get a snack. So the player just has to read the defense himself and make the decision. That's why you see the Lakers so animated on the bench during timeouts. Kobe is grabbing the whiteboard drawing up a play -- Gasol and Kobe are figuring out how to break a double team. The Lakers players know it's entirely on them -- and as a result they perform at a higher level than any other team in the league.

That's why they call him the Zen master -- on the surface of it -- wandering the sidelines looking completely lost and not calling timeouts seems like a losing strategy. But in practice it shifts the thinking of the players in ways that make them more responsible and more effective year after year.
Posted by RFK Action Front