Ya gotta see this photo 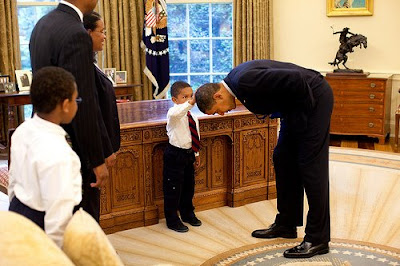 President Barack Obama bends over so the son of a White House staff member can pat his head during a family visit to the Oval Office May 8, 2009. The youngster wanted to see if the President's haircut felt like his own. (Official White House Photo by Pete Souza.)

Spend a moment thinking about that. Why would that be the foremost question on that kid's mind? The kid was asking: can someone like me, an African American kid with hair that is different from the white kids at school, really grow up to be president? That's what he was asking. And the president, bowed down before this kid and showed him: Yes you can.

I don't always agree with Obama. I hate TARP and Timothy Geithner and whole Wall Street bailout mess. But when I see photos like this, I think, wow, what an extraordinary extraordinary human being.
Posted by RFK Action Front

Email ThisBlogThis!Share to TwitterShare to FacebookShare to Pinterest
Labels: Obama