A Progressive Manifesto for the Global Economy 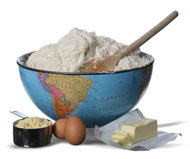 The New York Times published a brilliant article today on where each ingredient in a loaf of Sara Lee bread comes from. A single loaf of bread contains ingredients from as many as 17 countries including China, India, Mexico, and Vietnam. Which is fine insofar as that goes. But the problem is that many of these countries have different environmental laws (and labor laws and food safety laws) than we do. What's the point of banning a pesticide in the United States, if the food I ingest is grown in a country that doesn't ban (or doesn't enforce the ban on) that same carcinogen!? This article followed on the heels of another article that explained that "no major vitamin manufacturers remain in the U.S." So we have laws governing our air, land, and water, but our food and our vitamins don't always come from our air, land, or water.

So all of this has got me thinking that we need some common sense rules for how things are going to go in this global economy (not the rules we're currently following, but rules that actually benefit people.) This is still a work in progress obviously so feel free to add ideas and suggestions. But here's my first hit on things:

1. Local, local, local. I know most of you already understand this idea (so I'm a little late to the party) but, I'm just starting to get how important this is. Locally grown food, locally sourced materials, locally hired people, locally produced goods. (But also check out # 6 below).

2. If we're gonna trade with a country, both countries should have the same labor, environmental, and food safety laws.

3. If the laws are not harmonious--then the higher standard (between the two countries) shall be the binding standard for both countries. (In a nutshell, that's why the agreement that created the EU is better than NAFTA--Europe insisted on upward harmonization of standards).

4. There need to be international agencies that have the power to enforce environmental, labor, and food safety laws. We also need standing international police and courts to support the enforcement of those laws. (BTW equal labor laws mean that if we're gonna trade with Europe, then we should have the same number of mandatory vacation days as they do. Woo hoo!).

5. We need direct election of delegates to the United Nations. I think people would be a lot more invested in a world governing body if they had a direct say in electing the delegates to that body.

That's all I got for right now. As always, feel free to add additional ideas to the comments.
Posted by RFK Action Front