If we had the NAFTA debate to do all over again, I think the soundbite that could have won it for us would have been this:

NAFTA would make it illegal to do any manufacturing in this country.

It's exactly the sort of cut-to-the-marrow soundbite that the right loves to use to polarize debate -- to say 'you're either with us or you are America-hating scum.'  And unlike conservative talking points this soundbite has the added benefit of being true.

Here's why it's true:

For-profit corporations in this country are required by law to maximize profits for shareholders.  That's what it means to be a for-profit company.  So if a U.S. company can have its product manufactured here for $17 dollars an hour or manufactured in another country for $1 an hour -- the U.S. company is required, through its legal obligation to shareholders, to offshore the production to the lowest cost manufacturing center.

But here's the thing.  We very well may get to have the NAFTA and WTO debates all over again -- because the recession we are going through right now is the direct result of NAFTA & WTO.  And the recession is not going to end (in any meaningful lasting way) until trade policy changes.

Both of these trade agreements were based on absolute intellectual horseshit.  The idea was that yes, the U.S. would end up sending a lot of manufacturing jobs to lower cost production countries. BUT! the argument went, everything would be okay because U.S. workers would still be the ones designing and managing and marketing those products -- and those management jobs would grow and would be far better jobs than the lousy manufacturing jobs they replaced.

Under currently international trade agreements, Hewlett Packard could offshore every single job in the company -- manufacturing, design, marketing, legal, etc. to India -- leaving one single job left in the U.S. for the CEO (if he chose to live in Malibu or something).  And we can't all be the CEO of HP.  The U.S. economy needs at least 150 million jobs in order for our people to survive. We need a natural diversity of different types of job to match the natural diversity in our population -- namely we need an economy such that anyone with a strong back and a good attitude can make a middle class standard of living in this country -- and that's what we had before NAFTA & the WTO.

So the prosperity that we saw over the last 20 years was an illusion.  Suddenly, TVs and electronics and clothes got really really cheap.  And we felt wealthy because we could buy more of them.  But all the while, the core of our economy was being hollowed out as manufacturing jobs were being sent overseas.  Specifically, that cheap big screen TV at Best Buy was only cheap because it came at the expense of a unionized manufacturing job in the U.S.  The $500 you saved on the TV came out of the salary of an American worker.  And now 20 years later, SURPRISE! all the manufacturing jobs are gone and they aren't coming back.  An entire generation of American men with only a high school education has been sacrificed to the beautiful equations of Milton Friedman that turn out, in the real world, to only benefit his corporatist friends.  And then endless cheap credit kept the illusion of prosperity going, even as we had run out of jobs and the salaries that went with them.  But now that bubble has popped and all of the gauges are showing empty, empty, empty.

As the Obama administration strives to jump start the economy -- there is quite literally nowhere to pump the stimulus money.  You can't pump it into traditional manufacturing -- because those jobs are gone.  So they try to pump it into green manufacturing and energy efficiency -- which is great.  Until you realize that U.S. corporations are still required by law to maximize profits for their shareholders and Chinese manufacturers can make anything we can make here -- and only pay their workers $1 an hour (sometimes less).  So then you realize that the hundreds of billions of dollars we are pumping into green manufacturing -- is really just the U.S. government funding the R&D that is going to make Chinese manufacturers rich.

So Obama and his boys Tim Geithner & Larry Summers then try to reinflate the housing bubble through tax credits and guarantees for big banks to take big risks again -- because really, other than financial ponzi schemes, we don't really make anything in this country anymore.  But how long is that papering over of the problem gonna last?  Until the mid-terms in November?  Until the 2012 presidential election at the latest.  But then the clock runs out again.

So when the double dip recession comes and the economy completely flatlines because we don't have any manufacturing jobs in this country (and the white collar research and design jobs are not nearly enough to make up for the jobs that are lost) -- I propose that we start the debate about rebuilding our economy by canceling NAFTA and dismantling the WTO.

Quite literally the kids in black were correct and the white (University of Chicago) guys with Ph.D's were terribly, catastrophically wrong. 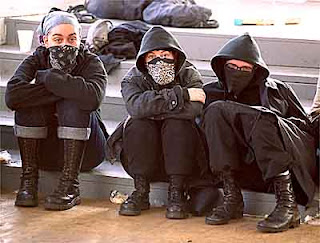 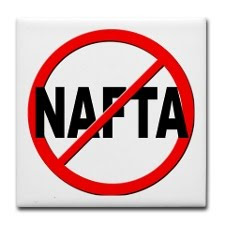 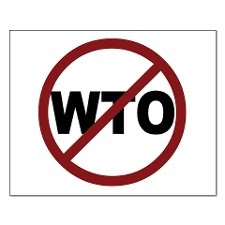 This brings me back to 1999 and the "battle in Seattle" protests against the WTO all over again. I knew there was something to that whole thing, but nobody seems to be talking about it in conjunction with the recession. Interesting thoughts my man!

Thanks for the comment Duff! There is this interesting synchronicity between the stuff you are writing about and the stuff I am writing about I think. You distrust the leading gurus in the personal development field and show that the 'emperor has no clothes' (usually because he's trying to bang a groupie). And I often try to show how the leading economists in this country are actually creating a self serving narrative that doesn't actually reflect reality much at all.

It's interesting to note too how colonized and homogenized the public discourse is in this country. Almost no one in public office or prominent in the media even thinks to question our trade agreements and the ways in which they have decimated the working class in this country. And yet, it's really not that complicated -- if we ship all of our manufacturing to China and other countries (as we have done) it's gonna be pretty hard to have a robust economy over the long term (but cheap TVs! yeah, we've got lots of those).