John McCain has some 'splaining to do

John McCain seems to have a thing for the younger ladies. He was 42 (and married) when he met Cindy (who was then 25). Now comes news that Senator McCain may have been romantically involved with Vicki Iseman, a registered lobbyist who was 40 to McCain's 71! From today's NY Times:

Early in Senator John McCain’s first run for the White House eight years ago, waves of anxiety swept through his small circle of advisers. 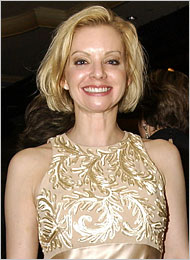 A female lobbyist had been turning up with him at fund-raisers, in his offices and aboard a client’s corporate jet. Convinced the relationship had become romantic, some of his top advisers intervened to protect the candidate from himself — instructing staff members to block the woman’s access, privately warning her away and repeatedly confronting him, several people involved in the campaign said on the condition of anonymity.

When news organizations reported that Mr. McCain had written letters to government regulators on behalf of the lobbyist’s clients, the former campaign associates said, some aides feared for a time that attention would fall on her involvement.

I want to make a few points about this:

1.) If McCain really was sleeping with a registered lobbyist, this is a huge problem. While McCain speaks out against trading votes for campaign contributions, this gives the appearance at least of his being willing to trade votes for sex.

2.) John McCain needs to disclose every single client Vicki Iseman represented and any actions he took on their behalf.

3.) This is not McCain's first ethics problem. He was also part of the Keating 5 -- a group of 5 Senators who told regulators NOT to investigate problems at Lincoln Savings and Loan -- which in turn led to the Savings and Loan Crisis in the mid 1980s. The S&L crisis cost taxpayers billions of dollars.

4.) I suppose adults can do what they want. But I don't want to hear any Republicans talking about so-called "families values" this election when the person they have chosen to represent them doesn't seem to hold himself to the same standards.

5.) When Chris Matthews and other blowhard pundits call John McCain a "maverick" -- is that just an old boys' club code-word for a guy who's getting a little something on the side? 'John, you 'ol maverick, she's 30 years younger than you!'

Update #1: The Washington Post, Huffington Post, Americablog, and DailyKos all have the story now too. It's also blowing up on Digg. The American Spectator (not a site I usually visit) claims the NY Times had this story for 5 weeks but withheld it. If so, the NY Times may have some 'splaining to do themselves -- did the editors who wrote the paper's official endorsement of McCain (before the Republican primary in NY) know that the paper was withholding a story that may have prevented his Super Tuesday victories?

Update #2: I wonder how Republican Apologist-in-Chief, David Brooks, is gonna try to spin this? I gotta figure he's wracking his brain right now -- "If McCain can score with younger chicks, it shows he really connects with younger voters? McCain really is the youth candidate after all! Yeah, yeah, that's it! Or maybe... McCain has shown that he can think outside the box when it comes to his marriage, so he'll be able to bring that same independent streak to um, um, screwing the voters? No, no, that won't work..." It's gonna be a long night for Mr. Brooks. I've got $5 that says David Brooks criticizes the NY Times for reporting the story in the first place. Make it $10.

Update #3: Josh Marshall at Talking Points Memo has posted a nuanced and thoughtful analysis of this story. Definitely worth a read.

Update #4: D.C. superlawyer Bob Bennett is now on record as saying he worked to stop publication of the article in the NY Times several months ago.
Posted by RFK Action Front