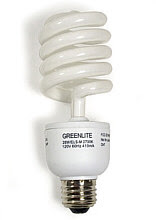 For a few years now, power companies (through their marketing and PR representatives) have been telling us to use those twisty twirly compact florescent light bulbs instead of regular light bulbs. The campaign has always felt a little disingenuous to me -- it was basically a way for power companies to say global warming is really our fault (not theirs) even when, if you ask the experts, they will tell you that completely changing over to compact florescent bulbs would only make a small dent in a much larger problem.

Now, the question is how to dispose of these compact fluorescent bulbs once they break or quit working.

Unlike traditional light bulbs, each of these spiral bulbs has a tiny bit of a dangerous toxin — around five milligrams of mercury. And although one dot of mercury might not seem so bad, almost 300 million compact fluorescents were sold in the United States last year. That is already a lot of mercury to throw in the trash, and the amounts will grow ever larger in coming years...

If you break a fluorescent bulb, there is no need to call in the hazmat team, the agency says. Just clean it up quickly with paper (no vacuuming or brooms), keep the kids away and open the window for a 15-minute douse of fresh air.

Are you f'ing kidding me!? This is a light bulb we're talking about! "No need to call a hazmat team" they tell you -- just don't breathe for fifteen minutes and don't let the kids near it and open a window and don't use a vacuum cleaner or a broom (because that would disperse it into the air and into your lungs). Regular bulbs can be disposed of in the trash without a problem. How many families are really going to follow these steps? How many people even know that CFL bulbs contain mercury and that mercury is a potent neurotoxin?

It's just like when the big oil companies told Congress that they wanted to add MTBE to gasoline because it was supposed to reduce gasoline emissions. It was an attempt to head off regulation or increased taxation of gasoline and it was presented as a win win solution. Then MTBE ended up leaking from gas station storage tanks and contaminating water supplies throughout the country. In the end, the solution was far worse than the original problem (and the original approach to addressing the problem -- regulation to reduce emissions or taxation to reduce consumption -- would have produced dramatically better benefits for society).

I'm done with compact florescent light bulbs. They didn't give off good light anyway. I'm just gonna keep on using regular light bulbs until they come up with a non-toxic alternative. In the meantime, I'm gonna plant a tree, reduce overall energy consumption, and vote for politicians who favor aggressive regulation of power plant emissions and global treaties to reduce greenhouse gases.

Update #1: Power companies (through their PR representatives and allies in government) will tell you that compact florescent light bulbs produce a NET DECREASE in mercury pollution. They acknowledge that each compact florescent bulb contains 5 milligrams of mercury. But they counter by claiming that the energy saved by these bulbs will reduce energy use and in the process, save 9 milligrams of mercury pollution which would have come from the power plant (to produce the energy for the less efficient regular bulb).

I think there are 3 problems with this argument:
1.) There is an big difference between mercury being released miles away (and thousands of feet into the atmosphere) at a power plant and mercury being released in your living room. I'd rather not have mercury released in my living room.
2.) It assumes that their estimates are correct (and these are power companies we're talking about here so there is at least some reason for skepticism).
3.) Perhaps this is the most important point -- THIS ESTIMATE ASSUMES THAT THE ENERGY IS BEING GENERATED BY A COAL-FIRED POWER PLANT. Coal-fired power plants emit tons (literally) of mercury into the air, which then gets into the soil and water, and ultimately into our bodies. Solar power, geothermal plants, and wind farms produce no mercury pollution as far as I know. Rather than forcing us to use toxic light bulbs (and continuing to license new mercury spewing coal-fired power plants) it seems that a better way to go would be to shut down coal-fired power plants and invest in solar, geothermal, and wind energy.

Update #2: Both the MTBE environmental disaster and the dangers of compact florescent light bulbs illustrate the problem I have with Barack Obama's post-partisan approach to politics. MTBE was promoted as a win-win bipartisan way to clean up the environment (in the same way that CFLs are being promoted today). Republicans and their corporate allies got a low cost way to act like they cared. Democrats got to claim a business-friendly environmental victory. Except, by not making the hard choices, society is actually much worse off in the long run (and in each case, people literally lose their lives because of these bad decisions). In each case, the partisan solution of regulating and taxing polluters would have produced dramatically better results for society than the so-called bipartisan approach.

Update #3: For those who want to know more about MTBE, here's a great link which details the whole history of the problem (complete with links to original source documents from the big oil companies showing what they knew and when the knew it):

You won't be able to USE regular light bulbs, because they're being regulated out of existence, "for your (all of our) benefit". I second your call on bullshit, and raise you a Darwin Award. This is a gross attempt by GE and Phillips to foist a more expensive light bulb on us to make more money. Mercury? oops, sorry, just clean it up with a rag!

RFK Action Front said...
This comment has been removed by the author.
1:22 PM

Here's a link to a great article on the history of the MTBE debacle:

"a different story emerges from internal industry documents and depositions, made public in recent successful lawsuits brought by cities and a California public interest group called Communities for a Better Environment that want oil companies to pay to clean up water made undrinkable and unhealthy by MTBE. The documents, provided to EWG by CBE's lawyers Scott Summy and Celeste Evangelisti, show that the oil industry itself lobbied hard for the MTBE mandate because they made the additive and stood to profit.

In a 1995 deposition, a top ARCO executive admitted under oath, "The EPA did not initiate reformulated gasoline...." He clarified that "the oil industry... brought this [MTBE] forward as an alternative to what the EPA had initially proposed."

In addition, there are links throughout the article to original source documents.

Thanks for the comments ya'll. Anonymous 2 -- good point on ethanol which research is showing to be a net environmental loser when all factors are included.

On the decision to require MTBE -- thanks for the data on ARCO. Makes sense. But I believe a closer look at the history of this decision will show that it was only after the fact (once it was clear that it was a environmental disaster) that oil companies tried to pin the blame on environmentalists. I've seen an article on this somewhere (NRDC perhaps?) -- I'll go try to look it up. I think it's important to document the source for this (either you for your point or me for mine) because it's a really important point.

Thanks again for the thoughtful comments.

Here's a link to a great article on the history of the MTBE debacle:

"a different story emerges from internal industry documents and depositions, made public in recent successful lawsuits brought by cities and a California public interest group called Communities for a Better Environment that want oil companies to pay to clean up water made undrinkable and unhealthy by MTBE. The documents, provided to EWG by CBE's lawyers Scott Summy and Celeste Evangelisti, show that the oil industry itself lobbied hard for the MTBE mandate because they made the additive and stood to profit.

In a 1995 deposition, a top ARCO executive admitted under oath, "The EPA did not initiate reformulated gasoline...." He clarified that "the oil industry... brought this [MTBE] forward as an alternative to what the EPA had initially proposed."

In addition, there are links throughout the article to original source documents.