The Wisdom of Crowds, Part 3, A Case for Impeachment 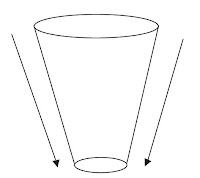 This is the final installment of my three part series on The Wisdom of Crowds by James Surowiecki.

In the first part of the series, I explained that, according to Surowiecki, in order for a group to be "smart," that is, in order for groups to make accurate predictions and decisions, the group needs to be diverse, independent, and decentralized.

Diversity brings in new ideas, independence insures that those new ideas get expressed, and decentralization prevents the sort of small minded group think that can lead a herd over a cliff.

Now here's where it gets interesting: In the months leading up to the September 11, 2001 attacks on the World Trade Center and the Pentagon--the U.S. intelligence agencies were organized in exactly this manner--diverse, decentralized, and independent. As Surowiecki writes, the U.S. intelligence community was, "a collection of virtually autonomous, decentralized groups, all working toward the same broad goal--keeping the United States safe from attack--but in very different ways." (p. 67)

In fact, U.S. intelligence agencies had all of the necessary pieces of information to know that an attack was coming. The CIA monitored and took pictures of a 9/11 planning meeting of Al Qaeda operatives in Malaysia in January 2000. The CIA knew that two Al Qaeda operatives moved to San Diego in January 2000. In fact, the Presidential Daily Intelligence Briefing for August 6, 2001 was titled, "Bin Laden Determined to Attack Inside the U.S" and Bin Laden wanted to hijack a U.S. aircraft.

So if we had all of the relevant pieces of data to prevent the attacks on 9/11 then how did they happen anyway.

THERE WAS NO AGGREGATOR.

In order for diverse, independent, and decentralized groups to make smart decisions there has to be someone to aggregate the information. Think about the example of a crowd at the state fair guessing the number of jelly beans in a jar--the aggregator is the person who adds up all of the guesses and finds the average. In a stock market, the aggregator is the New York Stock Exchange which collects all of the buying and selling information and shows the price of the stock (which reflects the collective wisdom of the group). For sports betting, the aggregator is the bookmaker in the casino who sets the point spread for the game.

In every Presidency before George W. Bush, the aggregator was the President of the United States. Think about how John F. Kennedy handled the Cuban Missile Crisis. He gathered all of the different viewpoints from all of the different defense and intelligence agencies in one room, had them all make their best case (which reflected the collective wisdom of their group), and then came up with a plan that reflected the collective wisdom of the entire group.

With President Bush, there simply is NO ONE at the top who is sifting through all the information to figure out the collective wisdom of all of the intelligence agencies. As former Bush administration counter-terrorism adviser Richard Clarke indicated, the Bush administration simply wasn't interested in counter-terrorism. Despite the warning the the Presidential Daily Intelligence Briefing, the President continued his vacation in Crawford, Texas.

In this case, the failure to aggregate the collective wisdom of the U.S. intelligence agencies has led to 2,974 American deaths on 9/11 and 3,646 (and counting) soldiers' deaths in Iraq. For all his talk of being The Decider, Bush has never fulfilled his responsibility as The Aggregator.

I found this in the second of your three articles, and find it a brilliant understatement of the situation we face today:

"To paraphrase, 'Every move a Republican makes depends on what his fellow Republicans do, and a Republican cannot act independently, which would help break the march to death.' When it comes to the Iraq war, Republicans in the House and Senate just march around and around in a circle (filibustering, delaying, denying), thinking they are following their leader when in fact, they never had one." (emphasis added)

This made me want to read your third entry.

It is obvious we lack leadership. What troubles me though is that a majority (or near-majority) of Americans voted for Bush. Twice! What does that say about the majority of Americans?

What we lack in America is character. Like Bush, we all have personality, but very few of us think for ourselves. The legacy of the cold-war was the doctrinal belief in the superiority of our system. We need to step back and consider that even our good system has its failings. Let us rid ourselves of doctrine and embrace diversity and rational analysis. Complacency is a matter of choice and says much about character.

I like your analogy of Congressional Republicans behaving like army ants in a “circular mill”, and that is at least one other good reason to finally get around to reading Surowiecki’s book the Wisdom of Crowds.

Ah yes, the election results from 2000 and 2004 do seem to suggest that crowds are not very wise.

Again in 2004, voter suppression in Ohio (and the growing voter caging scandal) distorted the wishes and wisdom of the crowd. In a clean and fair election, I think the crowd could very well have made the proper decisions in both cases. Plus, I still don't buy the notion that the exit polls and the final vote tallies didn't match--and in every case, the error favored Bush. I do not believe our elections are clean and so it's tough for the wisdom of the crowd to be properly aggregated in American elections.

I like your point about character. Especially in these chaotic times, character counts for more than ever.