5+ Political Burglaries, Are the Plumbers Still at Work? 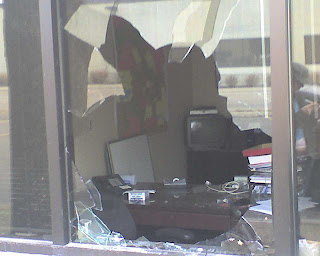 Over the past several years, I've read several stories about politically motivated burglaries. But I've never seen anyone put them all together in one place. The strange thing about burglaries at political offices is that they are often reported as local news, even when they potentially impact national political races.

So over the last few weeks, I've tracked down as many of the stories as I could remember:

December 31st, 2000, burglars broke into the Embassy of Niger in Italy. They stole letterhead and the official stamp bearing the seal of the Republic of Niger. These stolen materials were later used to forge documents claiming that Iraq acquired uranium from Niger--which became the cornerstone for the Bush administration's justification for invading Iraq. Remember this is one month after the U.S. Supreme Court appointed Bush President and nine months before the attacks on the World Trade Center.

October 11, 2004, The Lucas County, Ohio Democratic Headquarters was burglarized and three computers, including the party’s main system, were stolen. The burglary occurred 3 weeks before the Presidential election in the swing state that decided the outcome of the national election.

February 25, 2007, break in at the New Hampshire Democratic Headquarters. The New Hampshire Primary is the first in the nation (coming right after the Iowa Caucuses) and is often pivotal in determining who wins the nomination for President.

March 17, 2007, break-in at Minnesota Democratic Farm Labor Party headquarters. The intruder smashed an exterior window and stole the computer belonging to Communications Director, Nick Kimball, but passed up other valuable electronics, including a video camera and a high-end digital camera. No other computers were taken and it appears Kimball's laptop was the sole target of the robbery.

March 27, 2007, Minnesota Democratic Farm Labor Party headquarters broken into again. This time, the burglars "broke into the office of Andrew O'Leary, the DFL's executive director, stealing a computer that was not visible from outside of the building and going through materials in his desk."

That's an awful lot of burglaries don't you think?

But I wonder if perhaps this is evidence that The Plumbers are still at work? (For those who don't know, The Plumbers is the name given to the White House Special Investigations Unit in the Nixon Administration. The Plumbers included E. Howard Hunt and G. Gordon Liddy who were later involved in the Watergate break-in.)

What if The Plumbers was actually a much larger operation than we were led to believe? And what if The Plumbers just went underground after Watergate but then re-emerged years later? It'd make sense in a way, both Cheney and Rumsfeld are former Nixon administration officials--what if that's just how they do business?

UPDATE: A reader who goes by the screenname hubbird on MyDD.com noted that Barack Obama's campaign headquarters in Davenport, Iowa was burglarized last Friday. The burglars took two laptops and some campaign literature.

The Democratic Party headquarters in Manchester, New Hampshire was also burglarized on the weekend of January 20-21, 2007.

The burglary on February 23, in Concord, New Hampshire list above does not appear to be politically motivated.

The Republican Party offices in Spokane, Washington were burglarized in 2004 (although I think it's interesting to note that, in this case, cash was stolen not computers.)

It could be Decepticons trying to locate the All-Spark. We should notify Optimus Prime Immediately!

Kidding, this post is so disconcerting i must result to adolescent humor to balance my primal rage.

I love the latest republican spin fountain...That the civil war in iraq has shifted and is now mostly Al Qaeda forces battling US troops.

Pretty much any resistance is now labled Al Qaeda for the obvious emotional connection with the 911 attacks. "we have all agreed Al Qaeda is evil and this is definitely that."

Now i have not been on the ground in Iraq, but if i had to venture a guess, the resistance is a group of desparate completely disenfranchised men with nothing else to do and a clear object of frustration. If there were some other country's tanks rolling down my street and i could not find work because they had blown everything to shit, i would be the first in line with a sticky bomb.
Point being, the repub's are aggressively lying and manipulating again, and nobody is calling then on it.

What's interesting to me about this post is the moral dimension--namely, would this administration be willing to resort to burglary to advance their political agenda? Does it fit within their moral framework?

The Bushies repeatedly state that we are in a fight of good verses evil. They think they are permitted to wiretap and indefinitely detain Americans (abandoning habeus corpus and centuries of legal precedent). They are willing to kill (brown) people to advance their agenda in Iraq. So, at least on a theoretical level, doesn't it makes sense that 'a little stealing' at home and abroad probably wouldn't seem beyond the pale to them? Said differently, given everything that we've seen from them, why would they find burglary unacceptable but lots of other hideous things (like torture) acceptable?

That doesn't mean they did it in this case. It just means that their broad extra-legal worldview would seem to permit this sort of thing (as it did in a previous Republican administration). Which all serves to make me curious about these incidents.