I'm a big fan of Elizabeth Gilbert.  I really enjoy her voice on the page and I benefit from watching how she works through problems -- depression in Eat, Pray, Love and her doubts about marriage in Committed. Look, I get the criticisms of her writing (that it can be self indulgent, self absorbed, unaware of the vast privileges she enjoys).  But really that criticism can be leveled against the entire memoir genre for the most part.

I actually think Gilbert is a much better writer than most folks (even her fans) give her credit for.  Gilbert's ability to synthesize and summarize massive amounts of research into just a paragraph or two to set up a scene or a chapter is really quite amazing.  In Eat, Pray, Love, Gilbert gives the entire history of a town or a particular Buddhist meditation practice in just a few paragraphs to set up the narrative about her experience. Some of those paragraphs must have taken months of research just to get those 10 sentences right -- but she makes it look effortless. Her research into the history of marriage in Committed is equally skillful. 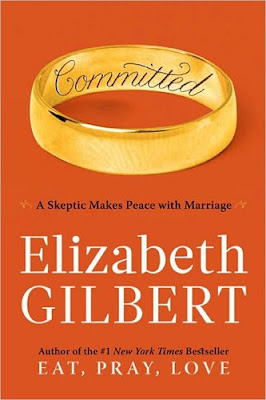 Committed: A Skeptic Makes Peace with Marriage is a different book than Eat, Pray, Love. Gilbert is older, a better writer, and wrestling with a different set of issues this time.  But the book stands on its own quite well and provides an insightful history of marriage and a compelling memoir of a woman wrestling with her doubts about getting married for the second time.

But today I want to quote from a section in chapter 3 of Committed to share her thoughts on same-sex marriage.  I think she makes a compelling, conservative case for gay marriage:


Anyhow, to be perfectly honest, I find it a bit crazy that social conservatives are fighting so hard against this at all, considering that it's quite a positive thing for society in general when as many intact families as possible live under the estate of matrimony.  And I say this as someone who is -- I think we can all agree by now -- admittedly suspicious of marriage.  Yet it's true.  Legal marriage, because it restrains sexual promiscuity and yokes people to their social obligations, is an essential building block of any orderly community.  I'm not convinced that marriage is always so terrific for every individual within the relationship but that's another question altogether.  There is no doubt -- not even within my rebellious mind -- that in general, matrimony stabilizes the larger social order and is often exceedingly good for children.
If I were a social conservative then -- that is to say, if I were somebody who cared deeply about social stability, economic prosperity, and sexual monogamy -- I would want as many gay couples as possible to get married.  I would want as many of every kind of couple as possible to get married.  I recognize that conservatives are worried that homosexuals will destroy and corrupt the institution of marriage, but perhaps they should consider the distinct possibility that gay couples are actually poised at this moment in history to save marriage.  Think of it!  Marriage is on the decline everywhere, all across the Western world.  People are getting married later in life, if they're getting married at all, or they are producing children willy-nilly out of wedlock, or (like me) they are approaching the whole institution with ambivalence or even hostility.  We don't trust marriage anymore, many of us straight folk.  We don't get it.  We're not at all convinced that we need it.  We feel as though we can take it or leave it behind forever.  All of which leaves poor old matrimony twisting in the winds of cold modernity.
But just when it seems like maybe all is lost for marriage, just when matrimony is about to become as evolutionarily expendable as pinkie toes and appendixes, just when it appears that the institutions will wither slowly into obscurity due to a general lack of social interest, in come the gay couples, asking to be included!  Indeed, pleading to be included!  Indeed, fighting with all their might to be included in a custom which may be terrifically beneficial for society as a whole but which many -- like me -- find only suffocating and old-fashioned and irrelevant.
It might seem ironic that homosexuals -- who have, other the centuries, made an art form out of leading bohemian lives on the outer fringes of society -- want so desperately now to be part of such a mainstream tradition.  Certainly not everyone understands this urge to assimilate, not even within the gay community.  The filmmaker John Waters, for one, says that he always thought the only advantages of being gay were that he didn't have to join the military and he didn't have to get married.  Still, it is true that many same-sex couples want nothing more than to join society as full integrated, socially responsible, family-centered, taxpaying, Little League-coaching, nation-serving, respectably married citizens.  So why not welcome them in? Why not recruit them by the vanload to sweep in on heroic wings and save the flagging and battered old institution of matrimony from a bunch of apathetic, ne'er-do-well, heterosexual deadbeats like me?  --Elizabeth Gilbert, pages 74 to 76, Committed: A Skeptic Makes Peace with Marriage.

Elizabeth Gilbert had improvised the people that are being concern to her life style. I am really interested to know about the things that she had done in her life to set the example.