The Ascent of Money, part 3, a closer look at the relationship between violence and wealth 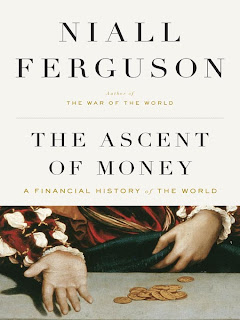 This is the last post in my three part series on The Ascent of Money (you can read parts 1 and 2 here).

With that in mind, as I read through Niall Ferguson's financial history of the world, I started to write the word "violence" into the margin anytime he mentioned the relationship between violence and wealth. I just want to draw your attention to some of those passages so that we can begin to move to the foreground, some of the underlying dynamics of our economy that deserve closer scrutiny:

"Behind every loan shark, there lurks an implicit threat." --The Ascent of Money, p. 40

It's obvious, but worth noting that the informal banker to most of the world's poor, relies on violence as a business model.

"Prior to the 1390s, it might legitimately be suggested, the Medici were more gangsters than bankers: a small-time clan, notable more for low violence than high finance. Between 1343 and 1360 no fewer than five Medici were sentenced to death for capital crimes." p. 42

Quite literally, modern banking began with mafia families in Italy. Interesting too that Ferguson sees capital crimes as "low violence."

"There were no debtors' prisons in the United State in the early 1800s, at a time when English debtors could end up languishing in jail for years." p. 60

I had forgotten about debtors prisons, but up until fairly recently (1869) the country that gave us the Magna Carta also loved putting poor people in jail.

But here's where things get really interesting:

"'War', declared the ancient Greek philosopher Heraclitus, 'is the father of all things.' It was certainly the father of the bond market. In Pieter van der Heyden's extraordinary engraving, The Battle about Money, piggy banks, money bags, barrels of coins, and treasure chests -- most of them heavily armed with swords, knives and lances -- attack each other in a chaotic free-for-all. The Dutch verses below the engraving say: 'It's all for money and goods, this fighting and quarreling.' But what the inscriptions could equally well have said is: 'This fighting is possible only if you can raise the money to pay for it.' The ability to finance war through a market for government debt was, like so much else in financial history, an invention of the Italian Renaissance." p. 69

"The Battle of Waterloo was the culmination of more than two decades of intermittent conflict between Britain and France. But it was more than a battle between two armies. It was also a contest between rival financial systems: one, the French, which under Napoleon had come to be based on plunder (the taxation of the conquered); the other, the British, based on debt." p. 80

"In many ways, it was true that the bond market was powerful. By the later nineteenth century, countries that defaulted on their debts risked economic sanctions, the imposition of foreign control over their finances and even, in at least five cases, military intervention. It is hard to believe that Gladstone would have ordered the invasion of Egypt in 1882 if the Egyptian government had not threatened to renege on its obligations to European bondholders, himself among them. Bringing an 'emerging market' under the aegis of the British Empire was the surest way to remove political risk from investors' concerns. Even those outside the Empire risked a visit from a gunboat if they defaulted, as Venezuela discovered in 1902, when a joint naval expedition by Britain, Germany and Italy temporarily blockaded the country's ports. The United States was especially energetic (and effective) in protecting bondholders' interests in Central America and the Caribbean." p. 98 [By the way, don't you just love how Ferguson describes international war crimes as "energetic (and effective!) ways of protecting bondholder's interests!"]

So the micro is the macro -- just as the loan shark will kneecap a debtor who is late on a payment, creditor nations will invade and overthrow governments, even democratically elected governments, in order to increase profits.

"As [Jan Pieterszoon] Coen [officer of Dutch East India Company (VOC) in the early seventeenth century] himself put it: 'We cannot make war without trade, nor trade without war. he was ruthless in his treatment of competitors, executing British East India Company officials at Amboyna and effectively wiping out the indigenous Bandanese." p. 134

Far from being an aberration, that theology of domination continues on to this day in U.S. foreign policy. It is also interesting to think about the ways in which creditor nations kneecap debtor nations to get their money back given that China is now the de facto banker to the U.S. -- holding nearly a trillion dollars of our debt.

"Besides cheaper calories, cheaper wood and cheaper wool and cotton, imperial expansion brought other unintended economic benefits, too. It encouraged the development of militarily useful technologies -- clocks, guns, lenses and navigational instruments -- that turned out to have big spin-offs for the development of industrial machinery." p. 285-286.

"The key problem with overseas investment, then as now, is that it is hard for investors in London or New York to see what a foreign government or an overseas manager is up to when they are an ocean or more away. Moreover, most non-Western countries had, until quite recently, highly unreliable legal systems and differing accounting rules. If a foreign trading partner decided to default on its debts, there was little that an investor situated on the other side of the world could do. In the first era of globalization, the solution to this problem was brutally simple but effective: to impose European rule." p. 289

You get the point. Even in a book written by a conservative Senior Fellow at the Hoover Institution (the Hoover institution -- intentionally named after the worst president in U.S. history), a guy who has a vested interest in obscuring the relationship between wealth and violence, the relationship shows up again and again. You can't talk about the history of money, or the history of finance, or economic history, without also talking about the history of violence and the ways in which violence has been used to enforce contracts and increase profits.

More on that topic in future posts.
Posted by RFK Action Front

Email ThisBlogThis!Share to TwitterShare to FacebookShare to Pinterest
Labels: book review, international law, international trade, The Ascent of Money, the relationship between wealth and violence, violence