What if Google ran the whole country? 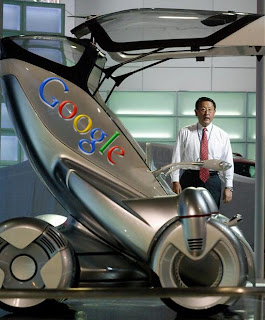 I want to explore an idea for a minute. I may not get it exactly correct but it's all jazz anyway right?

We live is a very strange era. On the one hand we live in an era of relentless technological innovation. About every 18 months, Intel, following Moore's Law, comes out with a new chip that makes all of their previous products obsolete. People have come to accept a world where we are all in a continuous cycle of learning new tools, new techniques, and new processes. So let's call this hand, insanely modern. But it's pretty cool too, because Google and others are anticipating our needs and quickly filling them.

On the other hand, our religious, economic, political, and energy systems are based on the notion that we reached the peak of history a long long time ago. Our moral and ethical compass is frozen in time 2500 to 1500 years ago (depending on your preferred religious system). Our political system is stuck 200 years ago (and the Bushies are trying to take our political systems back to a time before that -- building a bridge to the 16th century or so). Our economic system is positively Neanderthal (based on trade between unequal partners often carried out at the point of a gun/spear). And the world gets most of its energy these days from burning decayed prehistoric plants. WTF!?

We already know what the world would look like if we abandoned modernity is favor of a complete return to the old ways. It'd look like the Taliban -- complete with male dominance through violence in every sphere and public stonings for minor transgressions.

But what would the world look like if we completely abandoned all of the old ways in favor of the new? I'm not sure it would be all that bad. As I showed in a previous post, modern secular society tends to make better moral and ethical decisions than ancient wisdom traditions (because secular democracies are better set up to aggregate and sort the wisdom of the crowd than religious institutions). In terms of our political systems, what if Google ran the country? what would it look like? Every government employee would get 20 percent time to innovate and find ways to save money and improve services. They could also spend their 20 percent time finding ways to alleviate suffering in the world. (In many ways, Google has figured out how to harness the wisdom of the crowd and politics hasn't.) What checks and balances would need to be in place to make sure it didn't go evil?

What if every 2 years we not only had a new Congress but a new constitution and a new form of government that was faster and more responsive to the needs of the people? What if we expected that just like we expect to double our computing power and cut our computer costs in half every two years? What if we had a political system with evolution built into it (and no, the right to amend the Constitution is not a system with evolution built into it) rather than one that requires periodic (violent) revolution? What if we just called, "You've got to be kidding me" on burning dead plants to create energy? And what if our economic systems were not based on exploitative trade at the point of a gun and 14 year old girls in Cambodia sewing our shirts? What if trade agreements included a global minimum wage and a global standard for health, education, and the environment? It's not even really that complicated when you think about it -- it's just a question of dragging our politics and our economics out of the dark ages.

I just feel like all the technological innovation on the internet and in the high tech world shows us that change is possible-- it's fairly easy really. It's just a question of getting our religious, economic, political, and energy systems to catch up to where folks are already at.
Posted by RFK Action Front