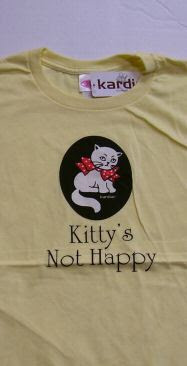 I'm usually not a Cary Tennis fan. (He writes the Since You Asked advice column on salon.com). I don't know what it is that usually doesn't work for me--sometimes it feels too snarky, other times it feels like his advice doesn't exactly fit the question perhaps?

But a friend forwarded this link to me, and it builds kinda slowly, but by the time I got to the end of the column, I was so profoundly moved that I had to just cheer.

Basically, a young woman wore a t-shirt to work that said, "Kitty Not Happy." (I found a similar item on e-bay--pictured on the right). And an old-school guy was writing in to ask if such attire was acceptable in the modern workplace.

I was a very naive young man when I left school in my early 20s. The first thing I noticed when I began working was that the workplace was profoundly undemocratic. If I hadn't been so naive perhaps it would not have shocked me, but it did shock me, for I realized that people outside of the academic world spend nearly all their productive time working, and if they are not working in a democratic setting then they are not practicing democracy in the most important arena of their lives, and so, for all practical purposes, they are not living in a democracy. They are living under authoritarian rule. They vote about large issues outside of the workplace, true, but in their daily lives they have no vote. They have no vote over who will lead them in the office or what the rules will be under which they labor.

...if in our daily lives we deny the humanity of our fellow workers, we are not living in the country we say we are living in. We are lying to ourselves.

And we have lied enough as a nation already. We have gone already too far in the direction of authoritarianism. We have strayed already too far from democracy. It is time we began acknowledging the tiny individual voices of simple human dissent among us.

Shortly after I read this post, another friend sent me a link to the wikipedia entry for Pierre Bourdieu--the French sociologist who coined the phrase "cultural capital." What struck me about the entry on Bourdieu was his idea of symbolic violence--that is "forms of coercion which are effected without physical force." It seems to me that symbolic violence is also what Cary Tennis is talking about in his column. Like Cary Tennis, too often that's been my experience of the modern workplace--it seems to me that way too many places where I've worked have been profoundly undemocratic and filled with symbolic violence which flowed as 'just the way things are.' But it wasn't until I read Cary Tennis' piece that I realized that the reason I am so profoundly unsettled by many modern workplaces is that, at its core, this symbolic violence is unacceptable and a violation of our stated values as a culture. (Thankfully, some other places I've worked have been fantastic--so it's not a monolithic situation--which also means that there are some solutions out there too.)
Posted by RFK Action Front